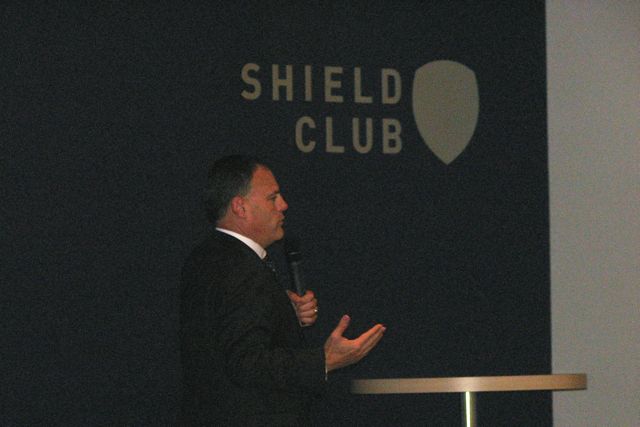 When Sporting Kansas City set out to turn KC into a real three-sport town, executives focused on the fan experience ? and the result is a team that instills pride and delivers financial success.

Chris Wyche, the Major League Soccer club?s executive vice president, stadium operations, told FEI Kansas City members that the business of soccer is thriving because of the team?s attention to the details of providing a world-class fan experience. FEI?s fall kick-off meeting was September 14 in the Shield Club at Sporting Park in Kansas City, Kansas.

?Everything that we do is about experience,? Wyche said. ?From a financial point of view, experience is what drives the success of the team.?

Providing an authentic experience, modeled after European or Latin American football (soccer), is a key strategy. The team changed its name from a mascot-oriented American-style sports name (Wizards) to Sporting Kansas City, giving the brand an international feel.

Sporting Park itself was built to create an authentic experience, similar to European stadiums ? but adding technology to enable online and social media interaction by fans attending games. That?s in line with Sporting KC?s marketing focus on millennials, which is paying off nicely.

Since 2006, Sporting Kansas City has gone from a paltry 450 season ticket holders to 14,000 season tickets now ? with a waiting list of thousands who want to buy season tickets. The club has moved from dead last in merchandise sales to No. 1 in Major League Soccer by creating new, fashionable jerseys and other gear ? for men and women.

And Wyche says more innovations are on the way to generate excitement for the Sporting KC experience.